Blood Memories are a trait possessed by Immortals in the Underworld universe, which allows them to transmit their memories through their blood to others in some way yet to be fully explained. This skill plays a major part in the Underworld films, allowing the characters to learn important information that they otherwise would not have known. The memories are obtained through blood ingestion or from a bite from a Vampire or Lycan, or a blood transferal from an Immortal. This process is possibly due to the Immortal virus affecting each species’ brain and nervous system, making their other tissues and fluids capable of obtaining organic signals and information, which could explain their bodies' healing abilities and ability to survive.

As part of the Chain, the Vampire Elders possess the skills to organize their thoughts and memories into a clear cohesive vision, a detailed record of their reign, which they can impart on another Elder with the giving of their blood. Taken from an Immortal without these skills, the memories are chaotic and without a sense of time, disorienting even to an Elder. It is unknown if the mastery of sorting Blood Memories comes with age, or if it replies on how closely related the Vampire is to the original Vampire, Marcus Corvinus. However, even common Vampires can see memories through biting and feeding off of another Immortal, as evidenced by the sounds of battle heard when Selene bites Alexander Corvinus, implying that she is seeing his memories from his life as a warlord. She later displays the ability to sort through her daughter's memories and the enhanced Lycan Marius's. However, both are after she becomes a Vampire-Corvinus Strain Hybrid. Regular vampires, such as Alexia, are shown to be able to receive blood memories, making it likely that the Elders are the only ones able to form them into a cohesive vision to pass on to each other as Viktor stated, but others can still get memories from the blood of other vampires without that vampire being able to choose what to show them.

When a Lycan turns a human through biting them, the bite can impart their memories on the fledgling Lycan. It is likely that this is a common occurrence in both Lycans and Vampires, as Selene is able to immediately recognize the visions Michael Corvin sees as memories from the Lycan who bit him and immediately tells him that he was bitten and the memories of the Lycan who did so passed onto him.

A Vampire-dominant Hybrid, whether merged with a Lycan or the Corvinus Strain, is fully capable of obtaining memories from Vampire or Lycan blood, and can sift through other Immortals' memories at will. It remains unknown if a Lycan-dominant Hybrid is capable of the same feat. 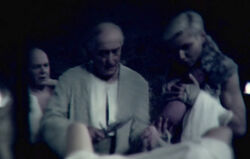 Retrieved from "https://underworld.fandom.com/wiki/Blood_Memories?oldid=52553"
Community content is available under CC-BY-SA unless otherwise noted.