Darius was a Lycan and the oldest of the three Lycan brothers, the other two being Vregis and Krandrill, who have styled themselves as "The Lords of the Crescent Wills". They were posing as a trio of human lords during the day while they terrorized the area at night, and had claimed a mansion located outside the city of Paris in the year 1890. He was arguably the most noble of the brothers, as he sacrificed himself so that his brothers can escape from Selene. He is seen in Underworld: Endless War.

Darius was on some type of business in the centre of Paris when he became aware of a Death Dealer's presence, who turned out to be Selene who had been dispatched to Paris to investigate and eliminate the three false lords. He raced back to his stately mansion to warn his brothers. He urged his two brothers to pack up so they could leave and avoid being killed. This implied that Darius has had prior encounters with Death Dealers in the past. They, however, did not take him seriously when he told them that it was time to leave the mansion behind, and so the three remained in Paris.

Together, the three Lycan brothers tried to ambush Selene down in the sewers, believing they can defeat her through the strength of numbers. She bypassed the other two brothers and leapt over Darius's head, and despite being clawed by Darius, was able to drive two swords, one down through each shoulder, before drawing out two guns and opening fire, peppering all three brothers with silver bullets.

To save his brothers, Darius put himself between them and Selene's gunfire, using himself as a shield, and giving both his brothers the chance to flee which they do. Just before Selene killed him, Darius swore that his brothers would avenge him. Afterwards, his brothers did indeed swear such revenge due to their anger at his murder. 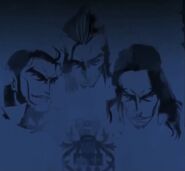 Darius being killed by Selene