Between 5th and 12th centuries

At some unspecified point in time, during the sixth century, William Corvinus was bitten by a rabid wolf, causing him to transform into the first Werewolf due to a genetic mutation known as the Corvinus Strain. William was a raging monster, who would kill all humans in his path. These humans would then turn into Werewolves themselves, until eventually, the species began to overtake the land.

William's twin brother, Marcus, later was bitten by a bat, and became the first Vampire. To control William and the spread of the Werewolves, Marcus approached a dying human warlord named Viktor and made a bargain with him; in exchange for both his military expertise and the conscription of his army, Marcus would grant Viktor immortality. Viktor then turned his human army into the first Death Dealers, and he, Marcus, and a third Vampire Elder, Amelia, commanded them.

While the Death Dealers struggled to combat the growing numbers of Werewolves, their efforts were limited, as the Vampires' movements were restricted to the night. Due to this, William would continue to evade their attempts to capture him for roughly six hundred years. Due to the high number of Death Dealers killed in skirmishes against the Werewolves, new Vampires were constantly being added to the Death Dealers' ranks. 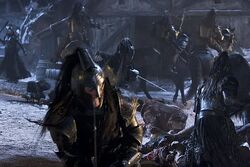 In the Winter of 1202 AD, the three Vampire Elders and their force of Death Dealers were able to track William to a remote village and capture him, allowing Viktor to lock him away for the next eight centuries. Despite this, the Death Dealers remained intact, and were used to track down and kill any existing Werewolves.

Most of the Death Dealers were killed in the 15th century, due to an uprising by a Lycan slave named Lucian, who had sworn revenge against the Vampires due to the murder of his lover, Sonja, herself a member of the Death Dealers before her death. The Lycans and Werewolves stormed the Vampires' castle, and were able to slaughter almost all living Vampires.

Through the centuries they remained the military might of the Budapest Coven, and are implied to be massed at the New World Coven as well.

These Death Dealers only appear in Underworld: Rise of the Lycans as personal guards of Viktor. The only difference is their helmets are more elaborate, providing more protection to the wearer's face. Viktor and Sonja also wear Elite armor. The armor and face plates of these Death Dealers were designed and cast to make them look like "the skeletal aspect of an armored Grim Reaper".[1]

After his ascension into the upper echelons of the Coven, Kraven recruited Soren to his cause and had Soren assemble a small, private organization of like-minded Death Dealers who would serve Kraven for nearly six centuries. Each of these men are hand-picked by Soren, Kraven's right-hand man.

Kraven's personal guards carry a long standing rivalry with the main body Death Dealers[2], although they themselves are technically part of the Death Dealer faction of the Coven.

Kraven's guards are seen throughout the events of Underworld performing various tasks for Kraven, including locking up a prisoner of the Coven and overseeing the arrival of the Vampire Elder Amelia. The guards serve Kraven's corrupt plans to overtake the Coven, aiding him in the murder of Amelia and in making clandestine meetings with Lucian.

Many of these men are killed when the main contingent of Death Dealers attack the Lycan den while Kraven and his men are there, causing war between the Vampires and Lycans.

The remaining guards are then quickly killed by Marcus when Kraven tries to assassinate him.

The beginning of Underworld shows three Death Dealers hunting Lycans in a subway station. One of the Death Dealers, Rigel, is killed early on by a volley of Ultraviolet ammunition from the Lycans' guns, while Selene and Nathaniel chase down the Lycans. Selene is able to corner and kill one of the remaining Lycans with silver bullets, while Raze shifts into his wolf form and mortally injures Nathaniel.

Selene then returns to the Vampire mansion and speaks with the Death Dealer Weapons Master, Kahn. Later on, two Death Dealers arrive at the train carrying Amelia and the Vampire Council, only to discover they have been slaughtered by Lycans, which is then reported back to Kahn. When the Vampire Elder Viktor learns of the deaths of Amelia and the Council, he immediately has all of the Coven's Death Dealers sent to the Lycan lair hidden under the subway. There, the Death Dealers are initially successful in their raid, however, the overwhelming number of Lycans leads to the deaths of most, if not all, of them by the end of the night.

A small group of Death Dealers are killed not by Lycans, but by Selene, who attacks them when they start shooting at Michael Corvin.

In a flashback sequence in Underworld: Evolution, Death Dealers are shown arriving at a mountainside village that has recently been attacked by the original Werewolf, William. The Death Dealers are quickly overwhelmed by the number of newly turned Werewolves, however, they are able to find and capture William, and they presumably slaughter everyone in the village afterwards.

After the events of the original Underworld, a small group of Kraven's personal guards still remain at the Coven. Kraven returns and gathers what is left of his men, then heads to the Elders' Chamber to kill the last remaining Vampire Elder, Marcus Corvinus. Kraven and his Death Dealers are all slaughtered when Marcus awakens as a Vampire/Lycan Hybrid from ingesting the blood of a deceased Lycan. Any Death Dealers not killed in either the Lycan den or the Elders' Chamber are massacred along with the rest of the Coven when Marcus kills every Vampire in the mansion and burns the building to the ground.

Almost every living Death Dealer is killed when Lucian and the Lycans rise up against the Vampires in retaliation for the murder of Lucian's lover and unborn child, overtaking the Coven and destroying the Vampire Council.

Six months after the events of Underworld: Evolution, humanity discovers the existence of Lycans and Vampires, and begins a series of Purges to root out and destroy every last Immortal. Every living Death Dealer is slain during this time, the only exception being Selene.

However, there are some younger Vampires, particularly David, who act very similar to Death Dealers, in that they readily defend their Coven with force.

With the new Lycan leader Marius proving to be a major threat, the Vampire Council agrees to grant Selene clemency if she will train their new Death Dealers, many of whom are "raw recruits." Selene ultimately accepts the deal, but is betrayed by Varga, the leader of the new Death Dealers who murders the raw recruits on the orders of Semira and frames Selene for it. Semira later attempts to use Varga and the Death Dealers to overthrow the Council, but when David arrives and proves himself to be the heir of the Vampire Elder Amelia, the Death Dealers side with him. The Death Dealers battle the Lycans when they attack the Eastern Coven, nearly being overwhelmed before Selene returns with enhanced powers and the Nordic Coven. With the help of the Nordic Coven, the Death Dealers hold off the Lycans long enough for Selene to kill Marius at which point the surviving Lycans retreat.