During the last decade, or so, of Amelia's final rule, she left the Coven (despite supposedly being with the New World Coven at this point in time) and travelled to the Nordic Coven with her mate Thomas to give birth to their son David. But Viktor (or possibly Kraven on Viktor's behalf) grew suspicious of her whereabouts, so he sent Semira to investigate. However, by the time that Semira and her troops arrived, Amelia had left the Nordic Coven and returned to the Eastern Coven; Thomas having already returned to his own Coven, taking David with him.

Years later, the Eastern Coven is one of only two known Covens to have survived the Purges alongside the Nordic Coven, making it the epicentre of the Vampire world. At an unspecified point in time in the early 21st century, Selene and David arrive at the castle, causing controversy about whether the Coven should trust Selene.

At this time, the Coven is being ruled by the Elite Council, consisting of Cassius, Istvan, Hajna, and an unnamed female council member, and most recently Semira. With the new Lycan leader Marius posing a major threat, the Council agrees to grant Selene clemency if she will train the Eastern Coven's Death Dealers.

Although Selene agrees to the deal, Semira frames her for murder with the help of Varga and takes some of Selene's blood to become a Vampire-Corvinus Strain Hybrid. Selene manages to escape with the help of David and Thomas, but Thomas is killed. Semira later attempts to stage a coup and take full power for herself when David returns, having learned of his true lineage. Once David proves himself to be Amelia's heir and thus the rightful ruler of the Coven, the Death Dealers and the Council side with him against Semira.

Shortly afterwards, the Lycans launch a massive attack on the Coven which they nearly win before Selene arrives with the Nordic Coven to help. In the battle, Semira is killed by David while Selene's enhanced powers enable her to kill Marius. Once Marius is dead, the Lycans end their attack on the Eastern Coven and retreat.

Following the battle, Selene, David and Lena are chosen as the new Vampire Elders by the Eastern Coven and its Council.

The castle contains a foyer, the Training Room, Armory, dungeons, and living quarters. All of the rooms are decorated in a Gothic fashion, except the Training Room and the Armory which are very modern, with much of the decor being black and therefore contrasting with the white stone that the castle is built from; most of the floors appear to be highly polished stone, possibly marble, which have been arranged by color to create large sweeping patterns.

The castle goes into lockdown in the daytime; with gates barring the entrances to the castle grounds (all located at strategic points and normally manned by security guards), metal shutters are automatically lowered, completely covering the doors and windows to keep the sun out. Some windows, and likely some doors, do have buttons located nearby that act as manual overrides and allow a Vampire to lower, raise, or to prevent the shutters from lowering/raising further for that particular window independently of the main system. The castle has surveillance cameras located at strategic spots to ensure the protection and safety of the Coven.

The foyer of the Eastern Coven's castle is a large chamber with a large set of ornate stone stairs opposite the entrance; the stairs in turn connect to a series of walkways that form a balcony, surrounding the upper floor of the foyer. The staircase branches off into several different directions as it rises; along the balustrades of the staircase are large, ornate, metal lamps that serve as both sources of light and as focal points in regards to the decor. Near the top of the staircase is a false wall that conceals the entrance to a series of hidden tunnels that run throughout the castle; this secret is only known to a very select few.

The floor appears to be polished stone, arranged in such a way that the varying shades create a pattern of sorts. As a whole the foyer is mostly devoid of decoration; the exceptions being portraits of Amelia, Viktor, and Marcus that appear to be kept on the wall of a walkway on the ground floor. The foyer is used for official welcomes and is large enough to allow the entire Coven to gather there so that they might greet honoured guests as a single unit. It is also the site of the primary battle between Marius' Lycan Horde and the Vampires of the Eastern Coven.

There are a large number of windows in the foyer that are kept shuttered during daylight hours; this causes the death of many Coven members when invading Lycans use projectile weapons to destroy the shutters, allowing numerous shafts of sunlight into the castle. 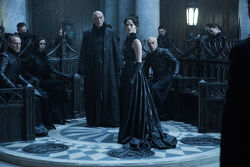 The Council Chamber is a large circular room, dominated by large stone pillars located around the edges and an angular, latticed metal bench, located on a dais in the center of the room, that serves as the seats for the five Council members.

The dais has a large grey and white design on the stone floor that allows it to remain distinct from the rest of the largely utilitarian chamber. Embedded within the dais are three ornate metal discs, labeled V, M, and A: they may be intended as reminders of the crypts of the Elders at Ördögház, where they were used by Viktor, Marcus, and Amelia during their slumber. However, the discs may also be covers for additional crypts intended for the Elders' use; possibly secondary crypts or alternative ones.

In parts of the Blood Wars graphic novel, the appearance of the Council Chamber, or the Eastern European Council Chamber as it is described, is somewhat different. In other sections, drawn by other artists, it is largely the same as on screen. In the relevant section(s) the chamber's design is more archaic, seemingly harkening back to Castle Corvinus. For example, instead of a single worked-metal bench, each of the Council members is seated upon an individual throne, seemingly made of stone that has been carved with Celtic knotwork designs; there is also a long matching table in front of the chairs, clearly for the use of the Council members.

The Winter Garden is the place where the Vampires throw their social gatherings and other similar events. As such, there is a stage like area from which the Vampires can make toasts and speeches, or to be used by whatever form of entertainment act the vampires might wish to book, a small orchestra area and plenty of space for groups of people to mingle and converse. The garden itself appears to be loosely modeled on the kind of formal garden often found in stately homes, palaces, etc; large beds of plants, all of which are kept healthy and under control as well as large, well-maintained walkways covered in what appears to be gravel of some kind.

The Winter Garden is also where the Coven cultivated plants, most likely for decoration or possibly for more practical purposes like salves or medicines. Since plants need sunlight to grow, this is likely the only place within the Coven that does not come under complete lockdown during daytime; some form of lockdown is still likely lest it the area become a weak point in the castle's defenses. It is possible that the Nightshade plant used to create the poison that paralyzes Selene was grown in the Winter Garden.

The training room/dojo is used to train and teach the Death Dealer recruits. The room itself has high vaulted ceilings and is left largely empty, presumably to allow the Death Dealers as much space as possible for sparring practice and other forms of training.

The main area contains high tech projectors that are able to emulate holographic three dimensional enemies and therefore can be used to simulate battles so that the recruits may learn battle tactics and strategy. The holographic enemies can also be used to teach the recruits how to shoot and learn about Lycan moves and attacks.

In the center of the room, there is a circular fighting cage with a base that is securely attached to the floor and a metal cage that mechanically descends from the ceiling, designed by Varga to teach the recruits hand-to-hand combat, how to fight in confined spaces, and how to use aspects of their environment, such as nearby walls, to their advantage. This ensures that no sparring match can get too out of of hand or spill over into the rest of the castle. The cage itself is controlled from a small adjacent terminal; there does not appear to be any way of controlling the cage from the inside. 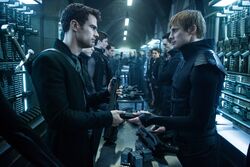 The armory is where the Vampires store the majority of their arsenal of weapons. The series of rooms that comprise the Armoury have a very sleek, modern high-tech aesthetic that involves the heavy use of highly polished metals and harsh lighting. The only furnishings are the weapons racks that cover the walls and the metal tables that occupy most of the floor space.

As one would expect, it's primarily used by the Death Dealers to store their various and numerous weapons. Weapons that can be seen in the armory include a large number of Japanese Katanas, numerous CZ Scorpion Evo 3 A1 submachines, and a variety of handguns. The armory is also the place where the Coven manufacture their own arms and ammunition; the products produced here also seem to be issued from here and, when necessary, repaired here.

The Castle is known to have a number of living quarters, however, the only quarters that are seen in Underworld: Blood Wars are those belonging to the Head of House/Council member Semira; as such it can be assumed that she occupies one of the largest and most opulent of the living quarters. Her Private chambers appears to comprise of several rooms, including an office, and contain various pieces of ornate furniture that may well be antiques (including a life-size portrait of herself clad in armor). Whether each Vampire has their own living space or if the individual living quarters are reserved for those of higher rank, with lower ranked Vampires residing in dormitory-like areas is unknown. It is unknown as to how the other living quarters are be decorated.