Budapest
Marius's Army is an army of Lycan packs led by the Lycan-Corvinus Strain Hybrid Marius during the Vampire-Lycan War.

After the Purges and the destruction of Antigen, the Lycan Marius began regrouping their race and forming an army to wipe out the Vampires once and for all. Marius's army was made out of hundreds of Lycans and several different packs that came together to wipe out the Vampire Covens. Aided by a Death Dealer spy, Alexia, and with superior tactics, the army wiped out at least four different Covens until only the Eastern Coven and the Nordic Coven were left. However, the defences of the Eastern Coven were so strong that the Lycans had no way of bypassing them without potentially losing up to 90% of their forces.

As a tactic for winning, the army hunted down the Vampire-Corvinus Strain Hybrid Selene in order to find out where her daughter Eve is. With Eve's blood, Marius could stabelize his already-incredible power gotten from draining the blood of Michael Corvin and periodically injecting himself with it. The threat of Marius and his army was considered so great that the Vampire Council reluctantly agreed to grant Selene clemency for killing the Vampire Elder Viktor in exchange for her training their "raw recruits" to fight and hunt Marius and his army. However, the ambitions of one member the Council Semira led to Selene being on the run once more alongside David.

After learning that Selene took refuge at the Nordic Coven, Alexia leads Marius and the army to the Coven's fortress. The Lycans, armed with ultraviolet ammunition, battled the Coven while Marius fought Selene with Alexia's help. While both sides suffered losses, Marius called a retreat after Alexia learns from Selene's blood memories that she didn't know where Eve was. As a result, the Lycans abandoned the battle before either side wiped out the other.

Once again, aided by Alexia as she shuts down the Eastern Coven's system defences, Marius's army launched a massive attack on the Coven during daytime when the Vampires are at their most vulnerable. Using riot shields to block the Vampires silver bullets and using mortars to blow holes in the Coven's walls and covered windows, letting in the sunlight upon the Vampires, the army at first has the upper hand. However, Selene returns with the Nordic Coven as a backup. Dropping their weapons, the army changes into their Wolf forms to battle the Vampires as Selene leads Marius to the training room to battle him one-on-one. Eventually, the fight ends with Marius being killed by Selene thanks to her new abilities.

As the battle continued, Selene and David returned with the severed head of Marius. Catching the attention of Marius's army, David announces to them that their leader is dead and they must take their wounded and leave. After David reiterated his order, the leaderless survivors of the army decide to retreat, accepting their defeat. Without their central leader, the packs presumably disbanded following the battle. 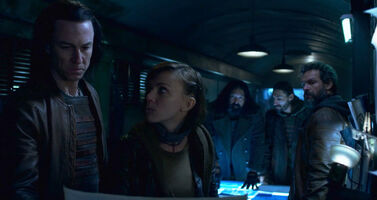