The Paris Mansion is a grand mansion with an estate covering the surrounding area, located outside of Paris. The Mansion was used as both a Lycan Den for the three Lycan brothers Darius, Vregis, Krandrill and later as a Coven of Vampires led by Lord Clovis and his followers. The mansion is only seen in Underworld: Endless War.

In 1890, this mansion is taken over by a trio of Lycan brothers to establish themselves a Lycan Den in the area, and as a part of their facade. During the day, they pose as human lords, while at night they terrorize the area as Lycans. The mansion also plays host to a group of women who act as lovers to one of the mansion's owners, Krandrill. When rumors of these Lycans reaches the ears of the Vampire Coven, Selene, a seasoned Death Dealer, is dispatched to Paris to investigate the reports. She is tasked to eliminate the three self-styled Lords, and to secure the mansion in question for the use of the Paris Branch of the Coven, putting the balance of power in the area in favor of the Vampires.

After finding the trail of the oldest brother, Darius, Selene approaches the estate via the sewers that run beneath the city. However, Darius becomes aware to the presence of a Vampire in Paris and warns his younger brothers that they must leave the mansion. Vregis and Krandrill, however, object, and insist that should they kill the Death Dealer instead.

Together, all three brothers try to ambush Selene down in the sewers, thinking that they have her at a disadvantage. Selene, however, proves to be more than they had estimated; with a pair of swords, she mortally wounds the oldest brother, who then sacrifices himself to shield his brothers against Selene's gunfire. The two younger brothers flee while Selene finishes off the oldest Lycan brother and secures the mansion. As they leave the estate via rowboat, they vow revenge against the Death Dealer and the Vampires. 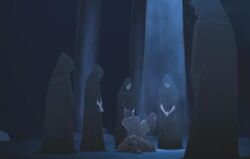 In 1967, Selene returns to Paris to investigate familiar reports of the two remaining Lycan brothers who had escaped her decades earlier. At this time, the mansion is under the control of the Vampires, and is set to be used for a ceremony that night. The brothers plot to crash the ceremony to lure Selene out, with the intention of killing all the Vampires present and reclaiming their old home.

In the middle of the ceremony, the Lycan brothers attack the Vampires and decapitate the Coven leader, Lord Clovis, before being attacked by Selene. The brothers retreat to the shadows, circling, before Vregis dashes out and knocks her against a pillar, causing her to drop her guns. Selene recovers, charges at him and drives her sword straight through the back of his skull. With the second brother down, Selene turns her attention towards the third brother, who charges at her, but she responds by tossing a shuriken at him, severing his left arm completely. The last remaining brother, Krandrill, flees the mansion.

One of the rooms has a black and white checkered floor with white armchairs and footstools. The hallways have stone columns located on both sides, and stone floors.