Semira was a Vampire who appears in Underworld: Blood Wars. She was the leader of the Eastern Coven following the Purges and the decimation of the Antigen Lycans by Selene. She is a fiercely ambitious Vampire and the main female antagonist of Underworld: Blood Wars (the male being Marius).

Semira was turned by Viktor sometime before 1402 and was originally part of the Old World Coven.

Despite no longer holding Viktor's affections the way she once had, her loyalty to him remained; she was still under his command at least until the late 1980's or early 1990's as it was Semira and her troops that were sent to the Nordic Coven to investigate when, supposedly, Viktor (or more possibly Kraven, as he and Lucian were plotting to kill Amelia for her blood in Lucian's hybrid experiments, and ultimately kill the then hibernating Elders, to take control of the covens) grew suspicious of Amelia's strange absence from Vampire society. However, by the time that Semira arrived at the Nordic Coven's stronghold, Amelia had already left (as had Thomas with his and Amelia's infant son, David) and returned to the Eastern Coven.

At some point Semira joined the Eastern Coven and rose through the ranks of the Coven, ultimately leading the Coven and joining the Elite Council.

Semira was the Head of the House of the Eastern Coven and has recently been appointed to the Elite Council. Prior to the events of the film the Coven had been pursuing Selene in order to punish her for her part in the deaths of the Vampire Elders Viktor and Marcus Corvinus. When Thomas arrived at the Eastern Coven's Castle, in response to a summons, Semira requested a private meeting. She convinced Thomas the he should, with her support, petition the council for Selene to be offered clemency in exchange for her training the Coven's inexperienced Death Dealers, due to the rising threat of Marius and his army. Thomas agreed to her plan, unaware that Semira had other plans in mind for Selene. Selene was granted clemency on the condition that Semira would be held personally responsible for Selene and her actions while she was in the castle.

Upon Selene and David's arrival at the the the Eastern Coven's castle Semira hosts a grand reception in their honor, all the while flirting with an uninterested David. At this point Semira and the leader of the Coven's Death Dealers, Varga, were revealed to be lovers and ate plotting to take complete control of the Coven from the Council. Once Selene began to train the young Death Dealer recruits, Semira instructed Varga to challenge Selene to a sparring match in order to poison her with nightshade using a hidden knife. Selene was quickly paralysed by the substance; as she lays on the floor of the training cage Semira appears and asks Selene if she really thought that Semira would let her get away with killing Viktor and that she intends to use her blood to make herself a Corvinus Strain enhanced Vampire. Semira reminds Varga that he has orders; he proceeds to kill the other Death Dealers who are present at the training session with UV bullets to eliminate any witnesses. When the massacre of the Death Dealer recruits is discovered by the rest of the Council, Semira instantly frames Selene, only for Cassius to order Semira and Varga to capture Selene alive for her crimes. However, Semira and Varga have already placed Selene in a bloodletting machine, hidden away in Semira private quarters, which might well kill her before they can bring her to Cassius. As they return to their captive, Semira and Varga discover that Thomas and David have beaten them there and are in the process of freeing Selene. A sword fight between Thomas, Varga and Semira ensues; it ends with Semira killing Thomas by stabbing him through the back of the head and then taunting David that he can't escape without being killed by the sunlight. To Semira's shock, David is able to jump out of the window and run with Selene to safety without harm. Semira is stunned to realize that David and Selene possess the ability to "daywalk."

Semira resolves to send Alexia after Selene and David; she is to follow them and confirm that they have gone to the Nordic Coven before reporting back so that troops may then be sent after them. Alexia comments on Semira speaking of the Nordic Coven as though it were a real place, rather than a myth. Semira remarks that where did Alexia think that she was when "Viktor was wasting his time on Selene?" Semira also makes her disdain for the Nordic Coven and their peaceful ways abundantly clear. While Alexia is completing her mission, Semira begins to prepare to drink Selene's blood, only to find that Varga used more of the nightshade extract than instructed and that Selene's blood is still not safe to consume.

Upon Alexia's return, Semira admits that Alexia has done more than she thought possible. However, she then reveals she has been aware that Alexia has taken the Lycan leader, Marius, as a lover and that they have been plotting against her. Semira kisses Alexia, distracting her from the concealed blade that Semira uses to slit her throat. Once Selene's blood has been sufficiently purified Semira adds the blood to a goblet of water and drinks it, transforming into an Corvinus Strain enhanced Vampire.

David soon returns to the Eastern Coven's castle, conveniently as Semira is attempting to stage a coup and remove the rest of the Council from power, at which point David reveals himself to be the son of the Vampire Elder Amelia and therefore the pure-blooded heir to the Eastern Coven. Semira argues that his heritage is irrelevant as she has the support of the Death Dealers. She is quickly proven wrong when Varga defies her orders and refuses to kill David, instead having Semira arrested and stripped of her titles and power.

As Semira is being escorted to the dungeons, Marius' Lycan horde attacks the castle. Her guards stop in the middle of a hallway, not realising that Semira has noticed the swords displayed on the wall above them. She escapes and manages to find David, waylaying him as he attempts to follow Selene in order to help her fight Marius. Semira and David battle each other, with Semira's new Corvinus Strain enhanced powers allowing her to match David's power and her centuries of fighting experience giving her the edge in combat. Finally, David throws a blade into the controls to the shutters on Semira's wall, raising them and exposing her to sunlight. Discovering that she now has an immunity to UV light as a Hybrid, Semira enjoys the sunlight for the first time in centuries, distracting her for a crucial moment. David comes up behind Semira and stabs her through the back of her head and out her mouth, the blow mimicking the way in which Semira murdered his father. However, David does not examine her body to check if she is actually dead; consequently, given her age and Corvinus Strain enhanced nature it is possible that she may have survived the wound (just as Viktor survived a similar wound). This suggests that she may play a role if a sequel is in production.

Semira is described as being fierce and incredibly ambitious. She displays intense loyalty to Viktor along with a level of coldness, ruthlessness, and cruelty that he may very well have admired. She is an intelligent and manipulative woman, but suffers from excessive pride and arrogance, which are her undoing. Despite being a member of the Eastern Coven's Elite Council she seems to be a warrior at heart. At one point Alexia states that Semira's desire for power is growing more insane everyday. Semira, in spite of her close bond with Viktor, comes to view the Vampire obsession with "purity" as being a weakness that holds them back; although she despises Lycans, she herself admits that she admires their ability to evolve and adapt. As a result, she seeks to "evolve" as well, becoming a Corvinus Strain enhanced Vampire to increase her strength and power. However, her desire for this power proves to be her undoing: seeing proof of her new power in the form of her new UV immunity she allowed herself to be distracted for a crucial moment in battle which leads to David landing a potentially fatal blow.

Semira has pale skin and black hair. As a human, she had blue eyes and gained electric blue after becoming a vampire. 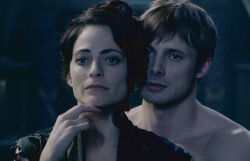 Semira and one of the Eastern Coven's Death Dealers, Varga, are lovers. Their relationship seems to be based upon lust and convenience rather than actual feelings. Semira is often unpleasant to Varga and rarely treats him well; she is clearly the dominant one in the relationship and expects Varga to obey her without question, regardless of her behavior towards him. This results in him betraying her when the opportunity arises, which genuinely shocks and angers her. However, her anger at Varga for his betrayal is still less than her dislike for David.

Viktor was Semira's sire and she seems to have been a particular favourite and trusted lieutenant of his. Given her resemblance to both Selene and Sonja (although the latter two bare more resemblance to each other than Semira does to either of them) it is possible that Viktor saw her as something of a protegé. No matter the nature of their relationship, Semira displays an intense loyalty to Viktor, even after being dismissed by him centuries earlier, going so far as to attempt to avenge his death.

Semira appears to harbour a deep seated jealously and later an intense hatred of Selene, stemming from Selene replacing her as Viktor's favoured progeny. This is furthered upon Selene killing Viktor. Despite Selene's reasons for killing Viktor, Semira's anger still results in her attempting to kill Selene to avenge Viktor's death.

Initially Semira is intrigued by David, seemingly as a result of knowing that he was brought back from the dead by Selene's blood. Attracted to him, she attempts to flirt with him, clearly hoping to seduce him. David does not reciprocate this attraction. However, her lust is quickly replaced with scorn once David is revealed to be the son of Amelia and the heir to the Eastern Coven. Semira appears to take this news as some kind of personal insult, going so far as to escape custody in order to try and kill him. Ultimately, David may have been the one to kill Semira.

Thomas and Semira appear to be well acquainted with one another, even going to far as to hug when they greet each other (only appears in the graphic novel). They seem to know each other well enough to know the way in which the other thinks; Thomas very quickly calls Semira out on her melodramatic tendencies, asking that she hurry up and tell him her plan, as he is aware that she always has one. Semira also seems to be one of the only people to have taken note of Thomas and Amelia's affection for one another, despite being shocked when Amelia is revealed to be David's mother.