The Purges are a series of mass killings against the Lycans and Vampires after humans discover their hidden existence.

Up until 2003, Alexander Corvinus carefully hid the existence of the Immortal species from the general human population using a specialized group known as the Cleaners. The Cleaners ensured that humanity never discovered the existence of both Immortal species, covering up the Eternal War and disposing any evidence of their battles. However, after the events of Underworld: Evolution, Alexander and the Cleaners were no more and, in their absence, humans across the globe soon learned of the existence of Immortals. In response to the perceived threat against humanity, the government (at least in the Western world[source?]), ordered the Purges to eliminate any Immortals.

During the Purges, weapons designed to kill both of the Immortals species became available to the general public, and some stores began selling teeth ripped from the mouths of Vampires and Lycans as souvenirs. Many humans turned against the Immortals, although they still had some sympathizers, such as Detective Sebastian.

The First and Second Purges

It is known that there were at least two separate periods of mass killing. Both races were targeted during the first one. There was a slight period of respite between the first and the second Purges, during which the Lycans rallied to fight the humans, against the caution of their leaders, but were wiped out. The second Purge was directed against Vampires, as the humans had received reports from biotech company Antigen that the Lycans had all been killed. As it turned out, Antigen was run by Lycans, who were using their company to create a vaccine that would eliminate the Lycans' allergy to silver.

In Underworld: Blood Wars, the Purges appear to have ceased. No explanation is provided for this; it’s possible that the surviving Immortals were able to escape death by hiding from the humans until their governments concluded that the Vampires and Lycans were extinct. The humans are presumably aware that some immortals could have survived, but the Vampires and Lycans continued their war with each other while largely ignoring or avoiding humans.

A Vampire being dragged into sunlight 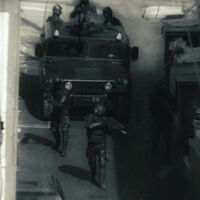