Underworld: Evolution
Underworld is a 2003 action-horror film about the secret history of two Immortal species, the Vampires and a type of Werewolf known as Lycans (an abbreviated form of lycanthrope). It is the first (chronologically, the second) film in the Underworld series.

The main plot revolves around Selene, a Vampire who is a Death Dealer who has devoted herself to the extinction of the Lycan species. She finds herself attracted to a human named Michael Corvin, who is being targeted by the Lycans. After Michael is bitten by a Lycan, Selene must decide whether to do her duty and kill him, or go against her clan and save him.

Perched on the ledge of a building on a rainy night, two black-garbed Vampires known as Death Dealers track a pair of Lycans walking on the street below. The Vampires, Selene and Rigel, specialize in assassinating this ancient species. Selene's motivation goes beyond duty; she also wants revenge, for she believes that Lycans slaughtered her family when she was a child. The Vampires believe that they defeated the Lycans many centuries ago and killed their leader, Lucian, and that they must now kill off the survivors. As the Vampires follow the Lycans into a subway station, the Lycans realize that they are being followed and open fire with submachine guns. In the chaotic shootout, Selene realizes that the Lycans may have been following a human, Michael Corvin, which is very unusual. After the Lycans retreat from Selene's barrage of machine pistol fire, she tracks them to their lair, where she hears loud howling.

When Selene arrives at the Vampire Coven's mansion, she recounts the evening's events. However, Vampire regent Kraven tells her to drop the matter and openly mocks her. Selene secretly continues her investigation, intending to find out why the Lycans were chasing a human and whether there may be a large den of Lycans.

Meanwhile, in an underground Lycan lair, a scientist named Singe is testing blood from kidnapped descendants of the Corvinus family, with the intention of finding a pure source of the ancient and powerful Corvinus blood type. He announces that all of his tests have been failing, and that he must find a new test subject soon.

Soon after, Selene breaks into Michael's apartment and the pair are attacked by Lycans, including Lucian, who bites Micheal on the shoulder. Selene helps Michael to escape and he saves her life after she passes out from blood loss and drives her car into a river. When Selene returns to the Vampire mansion with Michael, Kraven loses his temper and mentions Lucian in the present tense, making Selene suspicious of whether Lucian really died six centuries previously. At the same time, a curious servant named Erika discovers the Lycan bite on Michael's shoulder and chases him from the mansion.

Selene continues her investigation by breaking into the Coven's library to learn about the hidden past of the Vampires. She finds an ancient leather-bound book, where she recognizes the pendant Lucian had been wearing, confirming her suspicion that the powerful Lycan is still alive. She awakens a powerful Vampire Elder named Viktor, whom she trusts and believes will help her. To her surprise, Viktor condemns Selene to be judged by the Vampire Elder Amelia and the Vampire Council for the crime of awakening him ahead of schedule. Selene is locked away, but is soon released by Erika, who is desperately in love with Kraven and hopes Selene will no longer be competition for Kraven's attentions should she flee the Coven.

Selene flees to Michael, but a shootout causes her to become distracted, allowing the Lycans to kidnap Michael. Selene then captures Singe, and is able to torture him for information. She takes him back to the Coven, where he admits to Viktor that the Lycans have been trying to combine the bloodlines of the two species with the Corvinus Strain to create a powerful Hybrid. During this time, Amelia and the Vampire Council are slaughtered by Lycans in an ambush set up by Kraven. After learning of this, Viktor kills Singe and leaves in search of Kraven, who has fled the Coven. He tells Selene that she must kill Michael, and that she will be forgiven for awakening Viktor ahead of schedule if she does so.

Meanwhile, in the Lycan lair where Michael is being held captive, he learns through Lucian's memories that Viktor killed Lucian's Vampire bride, Sonja, to prevent the mingling of the two bloodlines, which led to war. The Vampires raid the Lycan lair, and Kraven flees to avoid Viktor's wrath. Before he does so, he shoots Lucian in the back with a silver nitrate bullet, leaving him to die.

Selene initially enters the lair along with the other Death Dealers, but she quickly abandons the group to find Michael, hoping to flee with him before he can be killed. After Michael is shot by a jealous Kraven, Lucian urges Selene to bite Michael before he dies, so that his blood will have both Lycan and Vampire strains. Kraven informs Selene that Viktor killed her family, not Lycans, and that Viktor murdered his own daughter, Sonja, which started the war. Viktor attacks Michael, but is too late, and Michael is able to shift into a Lycan/Vampire Hybrid. When Selene sees Viktor strangling Michael, she attacks him with his own sword, slicing his head in half. Selene and Michael then leave the Lycan lair together, intending to escape the remaining Death Dealers.

Back at the mansion, as Singe's blood seeps through the trapdoor of the sarcophagus of the remaining Elder, Marcus Corvinus, Marcus awakens with black eyes, showing that Singe's blood has caused him to morph into a Hybrid.

Critics generally gave Underworld a negative reception. It scored a 31% approval rating at the film-critics' aggregate site Rotten Tomatoes.[1] Roger Ebert said, "This is a movie so paltry in its characters and shallow in its story that the war seems to exist primarily to provide graphic visuals".[2] However, some critics were more favorable: the New York Daily News praised it as being "stylish and cruel, and mightily entertaining for certain covens out there".[3]

Salon reviewer Andrew O'Hehir gave mixed criticism and praise, stating, "[B]y any reasonable standard, this dark vampire epic — all massive overacting, cologne-commercial design and sexy cat suits — sucks". But O'Hehir also remarks that, "...at least it gives a crap", conceding that despite the movie's flaws, the complex vampire-werewolf mythology back-story "has been meticulously worked out".[4]

Kevin L. Nault writes that one "significant character, Kraven (played by Shane Brolly), was consistently flat or simply off. Almost without fail, he came across with an emotion that I didn't buy, given the circumstances, or merely came across emotionally flat when I was expecting real terror." Despite this, Nault calls Underworld "powerfully story-driven", and both he and Jesse Whitsitt-Lynch praise the film's story, special effects and use of emotion, with Whitsitt-Lynch calling the film a "slightly-flawed gem".[5]

The film's soundtrack was produced by Danny Lohner and distributed via Roadrunner Records. Lohner, a bass guitarist, guitarist and keyboardist, contributed several songs to the soundtrack under the pseudonym Renholdër. Lohner included songs by Skinny Puppy, The Dillinger Escape Plan, Finch, The Icarus Line and Lisa Germano.

Music critic Bill Aicher noted that the "soundtrack follow[s] in a similar gothic vein" as the visuals and states that it "does an excellent job setting the dark mood" by using "a veritable who's who in the genre" with an "impressive array of metal, hard rock, industrial, and otherwise gothic-themed tracks". Aicher notes that since "a majority of the selections [are] written, produced, or featuring Lohner, the album retains a sense of cohesion throughout, making it much more a complete product than has generally been the case with similarly-themed products." He stated that the "album's highest point" is a song featuring Maynard James Keenan, David Bowie and guitarist John Frusciante, entitled "Bring Me the Disco King (Danny Lohner Mix)", which he calls "[d]ark, brooding, sad, and twitchy".[6]

The Underworld Original Score was released on October 14, 2003, comprised of music composed by Paul Haslinger.

This film has a quotes category. 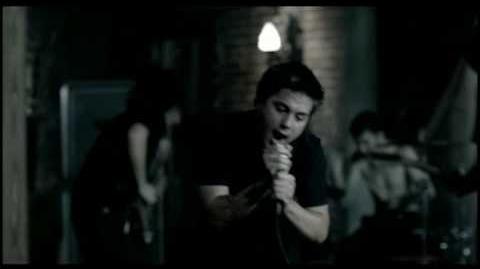 For a complete list of images from Underworld, please visit the Underworld images category.

Artwork from the DVD.